Nigel Hughes attended the Royal Academy Schools in London as a guest student between 1977 and 1981, having previously been the National Trust’s land agent in Northern Ireland.

Starting in 1982 he made a series of 40 large watercolours of Maya monuments in Mexico, Guatemala, Belize and Honduras, the product of 4 field trips. These were exhibited at the National Art Club, New York, the Museo Nacional de Antropología in Mexico and Canning House in London.  They were published as a book, with essays, by Antique Collectors’ Club (very few left).

On the same journeys he began the life-size oil paintings of the Cracidae bird family, 50 species scattered between Mexico and the Uruguay. Altogether these took 18 field trips. The paintings were shown at Oxford University Museum of Natural History, Missouri Botanic Garden and Houston Museum of Natural Science in Texas and eventually at the Fine Art Society in London.  They were published as a fully illustrated monograph, still available.

Life-size oil paintings of the 7 species of New World vulture followed,  begun in 2013.  They were exhibited at Oxford University Museum of Natural History in 2015.  Published as a fully illustrated monograph, still available.

On the strength of this work he became a Fellow of the Linnean Society of London and of the Royal Geographical Society.   His work has been shown at various commercial galleries in Ireland, Scotland and England, notably the St Barbe Museum in Lymington, a retrospective at the Red House Museum in Christchurch, and the Fine Art Society in London (birds and marine).  Some works are held in various museums, including H.M. Tower of London, 2 museums in Northern Ireland, one in Salisbury and one in the Royal National Lifeboat Institution’s Headquarters in Poole.

His pictures have been used widely for illustration, much of it through Bridgeman Images (link). He has written four books, Maya Monuments [Antique Collectors’ Club 2000], Curassows, Guans & Chachalacas [Fine Art Society 2006], New World Vultures [monograph 2015], Sunshine & Good Humour [2017].  He has also written reviews and articles, including for Country Life.

Between these activities, he has painted still lifes, animal and bird studies, and landscapes, some commissioned but mostly of his own choosing. There are also sculptures, mainly commissions. As mentioned on the DESIGN page, he has travelled widely in Europe and the USA for that part of his work.

His studio is in Somerset. Visitors are welcome by appointment.  Please see contact details below. 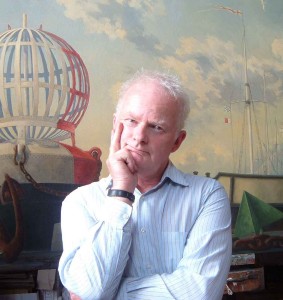 In connection with his books: nrh.ampato@gmail.com